Automakers embraced Takata’s cheaper technology almost 20 years ago despite signs that the airbags were unsafe. These airbags are at the center of the auto industry’s biggest recall. 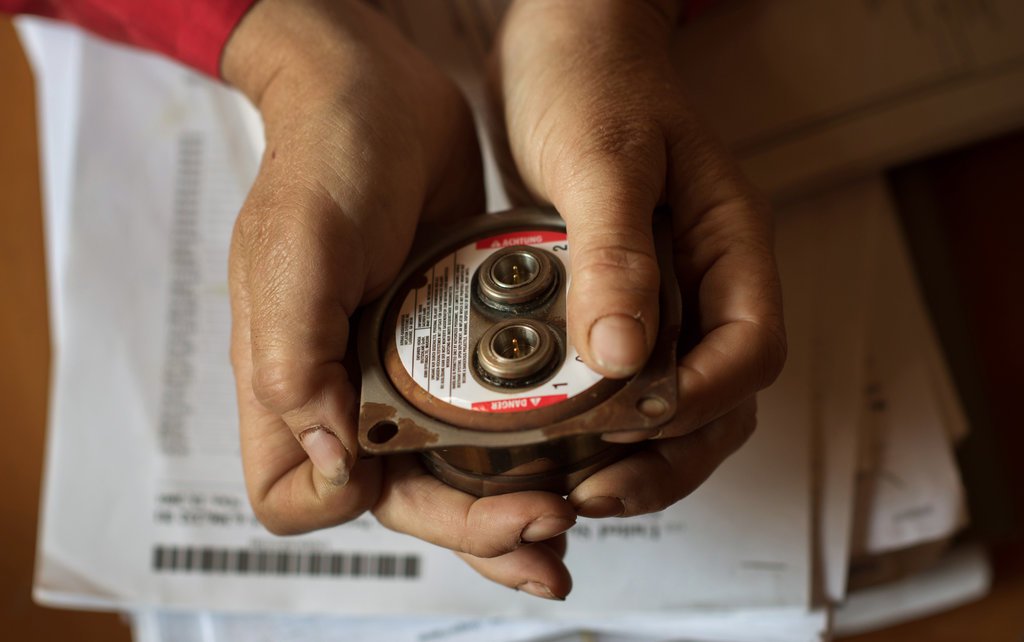 Linda Rink holding a Takata airbag inflater. As of April 2021, At least 29+ people have been killed by the faulty devices. – RAJAH BOSE FOR THE NEW YORK TIMES

In the late 1990s, General Motors got an unexpected and enticing offer. A little-known Japanese supplier, Takata, had designed a much cheaper automotive airbag.

G.M. turned to its airbag supplier — the Swedish-American company Autoliv — and asked it to match the cheaper design or risk losing the automaker’s business, according to Linda Rink, who was a senior scientist at Autoliv assigned to the G.M. account at the time.

But when Autoliv’s scientists studied the Takata airbag, they found that it relied on a dangerously volatile compound in its inflater, a critical part that causes the airbag to expand.

Today, that compound is at the heart of the largest automotive safety recall in history. As of April 2021, At least 29+ people have been killed and more than 100 have been injured by faulty inflaters made by Takata. More than 100 million of its airbags have been installed in cars in the United States by General Motors and 16 other automakers.

Details of G.M.’s decision-making process almost 20 years ago, which has not been reported previously, suggest that a quest for savings of just a few dollars per airbag compromised a critical safety device, resulting in passenger deaths. The findings also indicate that automakers played a far more active role in the prelude to the crisis: Rather than being the victims of Takata’s missteps, automakers pressed their suppliers to put cost before all else.

“General Motors told us they were going to buy Takata’s inflaters unless we could make a cheaper one,” Ms. Rink said. Her team was told that the Takata inflaters were as much as 30 percent cheaper per module, she added, a potential savings of several dollars per airbag. “That set off a big panic on how to compete.” 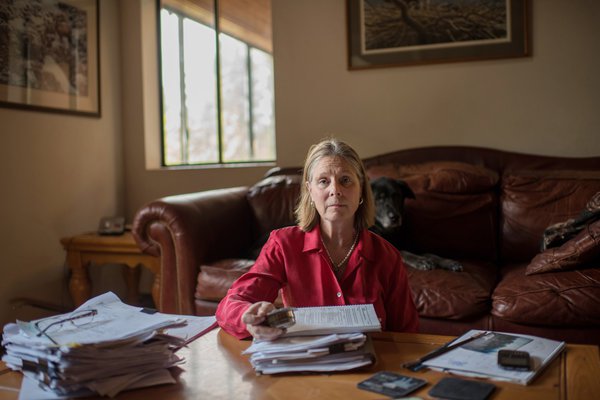 Linda Rink was a senior scientist in the late 1990s at the Swedish company Autoliv, which supplied airbags to General Motors at the time. “General Motors told us they were going to buy Takata’s inflators unless we could make a cheaper one,” Ms. Rink said. “That set off a big panic on how to compete.” – RAJAH BOSE FOR THE NEW YORK TIMES

Tom Wilkinson, a spokesman for General Motors, which was reorganized as a new company after declaring bankruptcy in 2009, said the Takata discussions “occurred two decades ago between old G.M. and a supplier,” and therefore it was “not appropriate for us to comment.”

“We knew that G.M. was getting low-cost inflators from others,” said Chris Hock, a former member of Mr. Taylor’s team who left Autoliv in April. “That was a dangerous path.”

Even with the record recall, deadly accidents and research critical of ammonium nitrate, Takata continues to manufacture airbags with the compound — and automakers continue to buy them. The airbags appear in the 2016 models of seven automakers, and they are also being installed in cars as replacement airbags for those being recalled.

Takata said in a statement that it had taken steps to protect the ammonium nitrate it uses against temperature changes, which along with moisture are the main factors contributing to its volatility. The manufacturer said it was also studying, along with safety regulators and some automakers, inflators with a drying agent “to better understand and quantify their service life.”

‘It Turned It Into Shrapnel’

The new airbag came not a moment too soon for Takata.

The Japanese supplier had been making seat belts in the United States since the mid-1980s, but its airbag business, which it began in earnest in the 1990s, was in trouble.

A previous generation of airbags supplied to Nissan had the problem of deploying too forcefully. Those airbags were linked to at least 40 eye injuries in the 1990s.

Takata began experimenting with alternative propellants. But in 1997 its inflator plant in Moses Lake, Wash., was rocked by a series of explosions that destroyed equipment and greatly curtailed production, according to insurance claims made by the company at the time.

After the blast, Takata was forced to buy inflators from competitors and airlift them to automakers across the country. The company’s American business struggled “to maintain corporate viability,” Takata said in a lawsuit filed against its insurer.

It was against that difficult backdrop that Takata embraced the cheaper new compound, ammonium nitrate, in its airbag inflators, according to former employees. Mark Lillie, who had worked as an engineer at Takata, told The New York Times in 2014 that considerations over cost spurred the supplier to use the compound, despite the dangers associated with it. Mr. Lillie raised concerns over the risks in the late 1990s, but his warnings went unheeded.

Around the same time, the team at Autoliv was asked to study the Takata design. Mr. Taylor, the head Autoliv chemist, said his team immediately recognized the risks posed by the ammonium nitrate.

“We tore the Takata airbags apart, analyzed all the fuel, identified all the ingredients,” he said. The takeaway, he said, was that when the airbag was detonated, “the gas is generated so fast, it blows the inflator to bits.”

Chris Hock, the former member of Mr. Taylor’s team, said he recalled carrying out testing on a mock ammonium nitrate inflator that produced explosive results that left his team shaken. “When we lit it off, it totally destroyed the fixture,” he said. “It turned it into shrapnel.”

The former Autoliv scientists said that they considered their verdict against the ammonium nitrate irrefutable, so much so that they understood Autoliv had alerted other automakers to the danger.

An Autoliv spokesman declined to comment on the company’s dealings with its automotive customers, which at the time also included Chrysler, Ford, Honda, Mazda, Mitsubishi and Toyota. Though Autoliv continued to supply those companies, several started using Takata’s new airbags in the early to mid-2000s.

Fiat Chrysler declined to comment, while Honda, Mitsubishi and Toyota said that they had not located any pertinent information from that period.

“There was no industry understanding in the late 1990s” that ammonium nitrate propellants, or explosives, were risky, Matt Sloustcher, a Honda spokesman, said in an emailed statement.

Autoliv’s concerns were backed by well-known research. Widely available studies going back decades warned of the tricky properties of ammonium nitrate, which can break down when exposed to moisture or temperature changes — vital factors, federal regulators said, with the defective Takata airbags.

“Some of the worst industrial accidents at the worldwide level involve ammonium nitrate,” Luigi T. De Luca, an Italian academic and a leading expert in solid propellant rockets, said in an email.

In a 2003 presentation, a propellant expert at TRW, which also made airbags with ammonium nitrate for several years in the early 2000s, outlined what he called “well-known issues” with using the compound, warning of “conditions that stimulate an explosive response.” The expert, Harold R. Blomquist, said that explosive response could be triggered by moisture and by temperature swings.

To make the inflators safe, TRW had adopted several practices, according to Harold R. Blomquist’s presentation and a spokesman at TRW. It freeze-dried its ammonium nitrate to protect it from moisture during the manufacturing process. It fitted its inflators with a pressure release valve to prevent ammonium nitrate from over pressurizing. And it used advanced welding to keep the inflators airtight.

Those safeguards, however, were not cost-effective, and the company phased out its use of ammonium nitrate in 2006. (Both Autoliv and TRW now use a propellant based on guanidine nitrate, a compound that is less sensitive to moisture and temperature swings.)

The dangers associated with ammonium nitrate made it difficult at times for Takata to find a supplier. An internal memo prepared in March 2000 by the Mississippi Chemical Corporation, an agricultural fertilizer supplier, states that early talks to supply Takata with ammonium nitrate fell apart over liability issues. A handwritten note on the memo notes: “Send letter informing them about explosion hazard.”

Airbag design and performance specifications are set by a consortium of automakers, with little involvement by safety regulators. In congressional testimony, Takata has insisted that specifications set by the automakers did not anticipate the problems caused by exposure to heat and humidity over many years.

But a review of the consortium’s design and performance specifications by The Times shows the automotive industry had raised concerns about the risks of ammonium nitrate more than a decade ago.

A 2004 update to its specifications singled out ammonium nitrate inflators and required them to “undergo added stability evaluation.”

The specifications from the consortium, known as the United States Council on Automotive Research, show a clear understanding of the damaging effects of moisture and temperature on airbag explosives. inflators must be evaluated for their “resistance to temperature aging in an environment of high humidity,” the specifications said.

The problem, it appears, is that no one enforced the specifications.

The update in the specifications was issued four years before Honda, the automaker most affected by the defective airbags, started issuing recalls in 2008. It was not until 2013 that other automakers started recalling cars with the airbags. Today, 64 million of the defective airbags have been subject to the recall.

The lack of enforcement of the specifications points to the self-regulatory nature of automotive manufacturing.

Joan Claybrook, a former administrator at the National Highway Traffic Safety Administration, said that while the safety agency should have been more engaged, the system places a heavy onus on automakers to make sure that suppliers comply with basic safety standards.

“Automakers play a big role,” she said. “They’re expected to be involved with their suppliers in a very detailed way.”

A former Takata engineer who spoke to The Times and who was recently deposed by Honda in litigation with Takata revealed how easily the supplier avoided detection in getting the defective airbags to market.

Workers at a now-closed Takata plant in La Grange, Ga., manipulated tests meant to measure whether inflators were airtight, said the former engineer, who still works in the automotive industry and spoke on the condition of anonymity. His testimony in the lawsuit has not yet been made public.

The tests involved inserting a small amount of helium gas into the inflators. The inflators were then put in a vacuum. If too much helium was detected outside the inflator, that meant the inflators had a leak, was defective and should be scrapped.

The engineer said he questioned his Takata bosses in 2001 about manipulating the tests, but was told “not to come back to any more meetings.” He left the company later that year.

Honda said that it became aware of the manipulated tests only when the engineer was deposed by its lawyers.

“Honda expects its suppliers to act with integrity at all times and is deeply troubled by this behavior by one of our suppliers,” the automaker said in a statement.

Susan Bairley, a spokeswoman for the consortium led by General Motors, Ford and Chrysler, said it did not keep records “of discussions leading to research results,” so it could not comment on concerns that might have resulted from the 2004 update to its airbag specifications. G.M. and Ford referred questions back to the consortium; Fiat Chrysler declined to comment.

Please check your vehicle to see if there are any Takata Airbag & Safety Recalls.